Physicists at Leipzig University have accomplished an important step in the use of quantum technology for computers and sensors. The experiments conducted by Professor Jan Meijer of the Felix Bloch Institute for Solid State Physics and his research unit are based on colour centres that colour a diamond red. The special properties of these centres were discovered by researchers at the University of Stuttgart in 2000, but only now has it been possible to produce the centres artificially with almost 100 per cent certainty. It is this high yield that makes it possible to produce quantum systems and, in the future, quantum computers without the considerable effort which has been necessary up to now. Meijer and his team have just published their research findings in the journal Nature Communications.

In a joint project with Professor Bernd Abel from the Leibniz Institute of Surface Engineering (IOM) in Leipzig, the physicists produced the special “red” diamonds themselves – in a unique state-of-the-art facility for ion implantation and electron irradiation. The production process involves firing a nitrogen atom at high speed into the extremely stable lattice of a rough diamond. The result is a special diamond which has a high density of its so-called NV centres. These are defects in the diamond lattice from a combination of a nitrogen atom and a flaw, which give the diamond special properties – including its red colour. If green light is shone on it at room temperature, the NV centres are cooled down locally to an incredible minus 273 degrees Celsius, even though they are still in the middle of the diamond crystal, which remains at room temperature.

“This allows us to work with quantum systems at room temperature. Until now, this was only possible in the laboratory at very low temperatures using cryostats – a type of huge, highly expensive thermos flask. That is what makes this development so exciting. In other words, it is possible to produce a quantum computer or a quantum sensor for everyday use,” explains Professor Meijer. In one easy-to-follow experiment, the researchers used a red diamond as an ultra-sensitive magnetic sensor to make an electric guitar produce sound. The position of the individual strings is scanned at very high speed and resolution, after which the tone is calculated.

It is the first time that this effect has been demonstrated in a set-up that is so simple and thus inexpensive to produce. In contrast to other techniques, it does not require difficult-to-produce microwaves or precisely aligned high-purity crystals, but rather simple, low-cost, specially treated industrial diamonds for drills or even conventional diamond powder, which is normally only used for sandpaper. “It is amazing that such a complex physical, highly sensitive effect is possible in such a simple and robust set-up,” remarks the physicist.

Unlike all previous quantum sensors, the highly sensitive magnetic field quantum sensor can be used at room temperature. “So far, the quantum mechanical properties have only been used in the laboratory. We now want to use them, for example, for sensors in medical engineering, in radar technology or for measuring positioning and lengths in machines. With its dense lattice, the diamond itself acts like a thermos flask. A seemingly paradoxical phenomenon, because the thermal conductivity of a diamond is ten times greater than that of copper. This is the only way to observe and specifically control these quantum effects in natural environments and at room temperature,” explains Meijer. In his opinion, another advantage is that these sensors depend only on a few natural constants, which simplifies the production process. This spells potential for a range of applications, from systems where safety is critical, to household electricity meters. “Quantum mechanics was largely developed by the theoretical physicists Heisenberg, Hund and Bloch almost 100 years ago at Leipzig University. So it is a particular pleasure that this implementation in everyday products can now also take place in Leipzig,” says Meijer.

A video introducing the research project can be seen on YouTube.

Original title of the publication in Nature Communications: 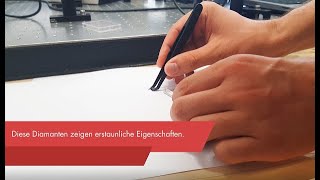 In the experiment, a red diamond is used to make the strings of a guitar sound. Photo: Swen Reichhold, Leipzig University

One of the tiny red diamonds used by Professor Jan Meijer for his research. Photo: Swen Reichhold, Leipzig University